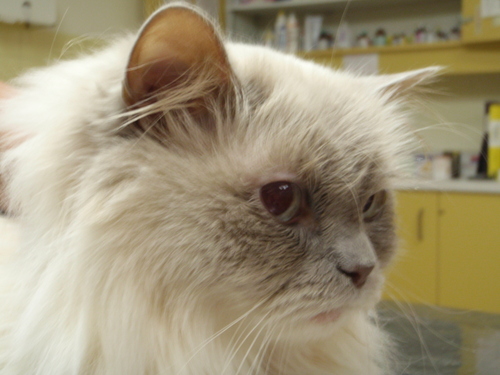 Murphy is a 10 year old male Himalayan cat who presented to us with a history of not eating for a few days. He was also vomiting and the owners noticed blood in the vomit at times. Murphy was admitted for bloodwork and abdominal radiographs (x-rays) to try and track down the cause of his illness. The blood results were normal, however the x-rays revealed an object lodged in his stomach.

Lateral abdominal radiograph view with Murphy lying on his side showing an object in the stomach (outlined by the red arrows). The heart, lungs, and chest are seen to the left and the rest of the abdomen is seen to the right.

A V/D radiograph view (with Murphy lying on his back) is usually taken at the same time. Murphy’s chest is at the top of the image, while his pelvis (hips) are located at the bottom of the image. The arrows point towards the object in the stomach which is also obstructing his duodenum (first part of his intestines).

Based on the findings it was opted to perform endoscopy on Murphy which is a specialized minimally invasive camera that can travel to the stomach to assess the problem. The object was removed using endoscopic graspers which removed the object from the stomach and intestines and brought it out through the mouth. 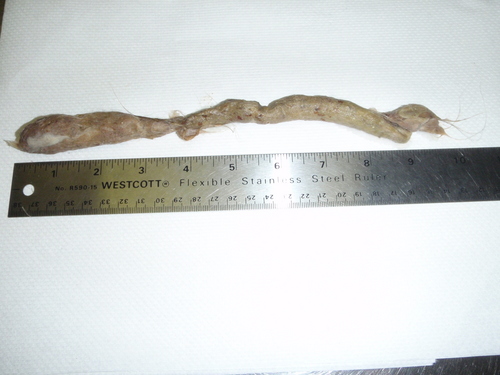 The obstructed object turned out to be a massive 10 inch hairball which was blocking the passage of any food and making Murphy quite ill. Removing the hairball with endoscopy alleviated the need for more invasive surgery and the associated pain and other potential complications. Murphy woke up from his anesthesia slightly groggy but feeling a lot better. He was home again within a few hours and back to his regular routine.

Himalayans are beautiful cats and generally have a fantastic temperament. Unfortunately however, they have very thick dense hair coats and are quite prone to hairballs. The majority of hairballs are vomited up as most cat owners can testify to. In Murphy’s case, the hair continued to accumulate forming a large mass that was too large for the stomach to digest or vomit up. Routine brushing/grooming, hairball formulas, and special hairball diets will help to reduce the formation of hairballs. Despite this, hairballs are a common part of cat ownership especially with long haired cats. However a hairball as large as this could be in a “Sci-Fi” movie.