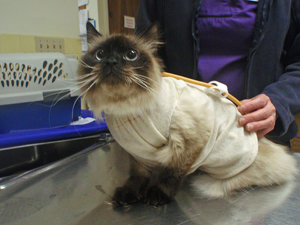 Miche, is a 3 year old Seal Point Himalayan. Shortly after adoption from a humane society,  Miche started to sneeze and sound congested.  She became less active and stopped eating.  When she arrived at our clinic she continued to show these signs and she had a fever.  It is common for cats to develop upper respiratory tract infections, especially if they have been in contact with other cats. This usually involves different viruses that affect the upper airways and can involve bacteria as well. These cats usually do not eat because they don’t feel well, they cannot smell their food and they have a fever.

Miche was kept in the hospital on intravenous fluids to hydrate her and was on intravenous antibiotics for the infection and fever. She was being fed by mouth but would not eat on her own and Miche’s fever remained high so a second antibiotic was added. After a few days, Miche stopped sneezing, her temperature normalized, she was brighter and was less congested. She still didn’t eat well, but some cats won’t eat in the hospital due to the stress of being in a different environment. Since Miche made a good recovery we decided to try her at home.

Miche was acting normally at home except she was not eating. This prompted bloodwork to see if there was something else going on causing her not to eat. The bloodwork showed that there was a problem with her liver. Cats that stop eating for as little as 3 days can mobilize their fat to their liver, causing liver disease. Considering Miche’s history of not eating, this was very possible. This is reversible and treatment involves insertion of a feeding tube to make sure the cat is getting enough nutrients.  A liver biopsy would also tell us what is happening in the liver and how to treat it. 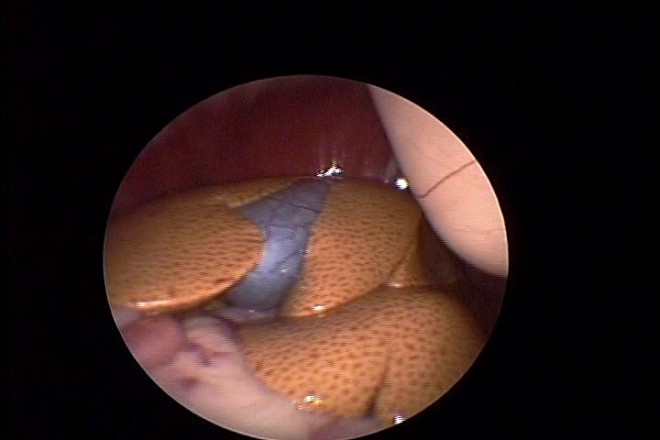 This is what Miche's liver looked like during her laparoscopy (a special camera that looks inside her abdomen). The mottled tan liver is seen and her gallbladder is the round grey/blue structure.

Taking a biopsy of Miche's liver. The view is magnified 10 times and the sample is actually only 4 mm diameter. The liver typically is a reddish/purple colour but appears quite pale and mottled here.

Miche’s owner decided to proceed with a liver biopsy and insertion of a tube that would allow her to feed Miche through this tube directly into her stomach.  Although it was difficult at first, her owner was very dedicated and learned how to feed Miche through her feeding tube. The liver biopsies came back as lymphocytic pericholangitis which is a type of inflammation of the tissues surrounding bile ducts in the liver. Miche was put on 2 medications: one to reduce the inflammation and one to help decongest the liver.  Miche’s owner was able to give these medications through the feeding tube.

The stomach tube is placed with the help of an endoscope in Miche's stomach. A catheter is inserted into the stomach through the skin in the ideal location after the endoscope fills it with air and the graspers grab the suture material that is tied to the feeding tube and brought back into the stomach. 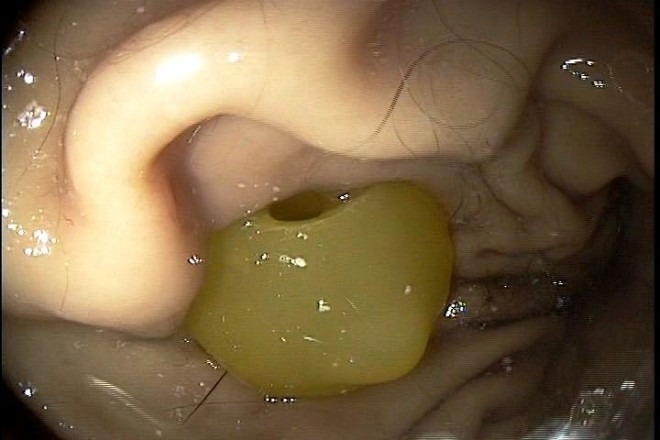 This is how the feeding tube appears in the stomach. Food is placed through the tube with a syringe and exits through the holes in the 'mushroom tipped" end. The tube can remain in place for months and once Miche began eating normally on her own, the tube was removed.

Miche continued to improve and now she is a loving, active and healthy companion for her human mother.  Three weeks later, a blood test was done to assess her liver function and came back all normal. Miche is now eating well on her own.  Her stomach tube was removed and she will continue to be monitored.  Miche is a fabulous cat and we all care for her very much.