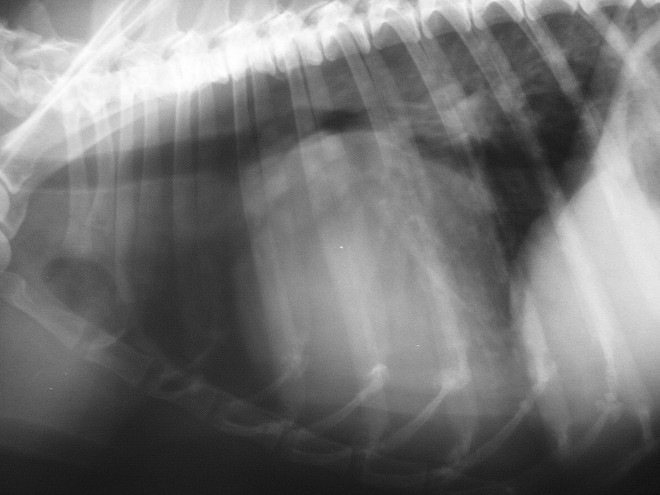 Zoie is an 11 ½ year old Dalmation.  In April of 2010 Zoie came in for her annual physical examination and routine vaccinations and was found to have a heart murmer.  Since Zoie came in every year for her annual vaccines, we recognized that this was a new finding for Zoie.  Although she was not showing any signs of heart disease at home, her owners agreed to radiographs to evaluate the size of her heart and check for any fluid or other signs of heart disease.  The radiograph below showed a very mild enlargement, but there was no evidence of fluid in her lungs at that time.   To further evaluate the cause of the murmer, Zoie went to the Ontario Veterinary College to have an ultrasound of her heart.  She was diagnosed with mild Mitral Valve Insufficiency.  At this time Zoe was still not showing signs at home so it was recommended to recheck her every 6 to 12 months to listen to her heart and lungs and look for changes on her chest x-rays. 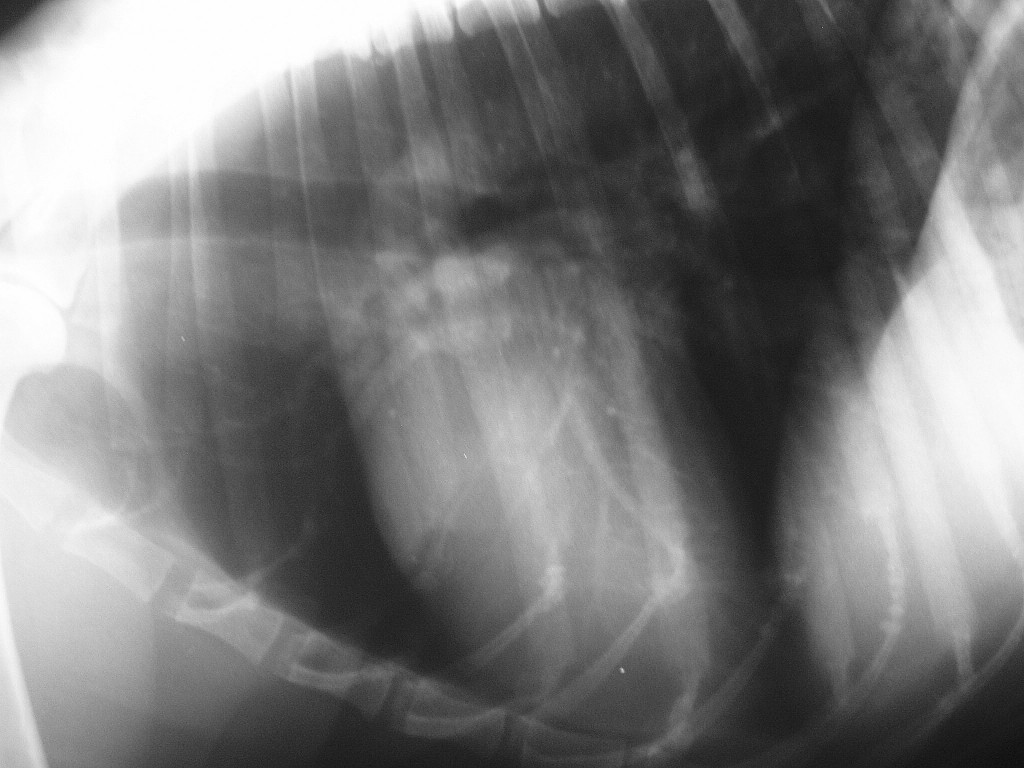 This is a lateral chest radiograph of Zoie's heart in April 2010. Her heart size is nearly normal size at this stage.

A year later in April 2011 the only change on her radiograph was a slight enlargement of her left atrium of her heart.   In August of 2011, however, Zoe started to have a mild cough and show mild signs of heart failure.  At this point she was started on heart medications and improved clinically.  The most recent radiograph in November 2011 showed a 50% enlargement of her heart and a large amount of fluid in her lungs which is called pulmonary edema.

This is a repeat lateral radiograph in April 2011. Note the slightly larger size of the heart silouette. 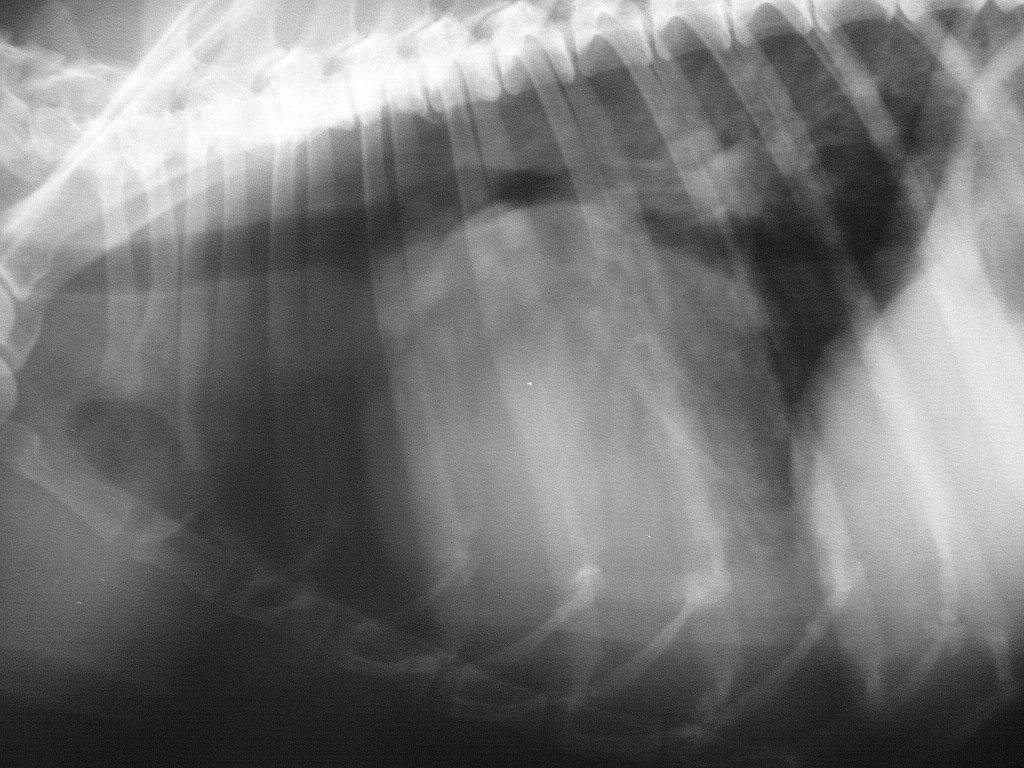 Mitral Valve Insufficiency is a condition that affects the valve of the heart that regulates blood flow from the left atrium to the left ventricle.  It is most commonly caused by a defect in this valve, which allows some of the blood to leak backwards.  This reduces the volume of blood travelling through the body.  The heart also has to work harder to make up for the leaky valve. Over time the heart begins to enlarge and the heart muscle has a harder time pumping in a stretched state causing secondary heart failure.

Treatment involves medications to remove fluid from the lungs caused by the congestion and poor blood flow, as well as medications to reduce the workload on the heart and improve blood flow to the heart.  While in the past a diagnosis of congestive heart failure carried a very short survival time, the newest medications available to dogs have been shown to extend their life by an average of several months to years.  A lot of small breed dogs (which is the breed that usually gets the disease) often have an increased lifespan of 1 to 3 years with a great quality of life. Since we were closely monitoring Zoie and her disease progression, we were able to start her on medication as soon as her signs of congestive heart failure started, and extend her life and quality of life by a significant amount of time. 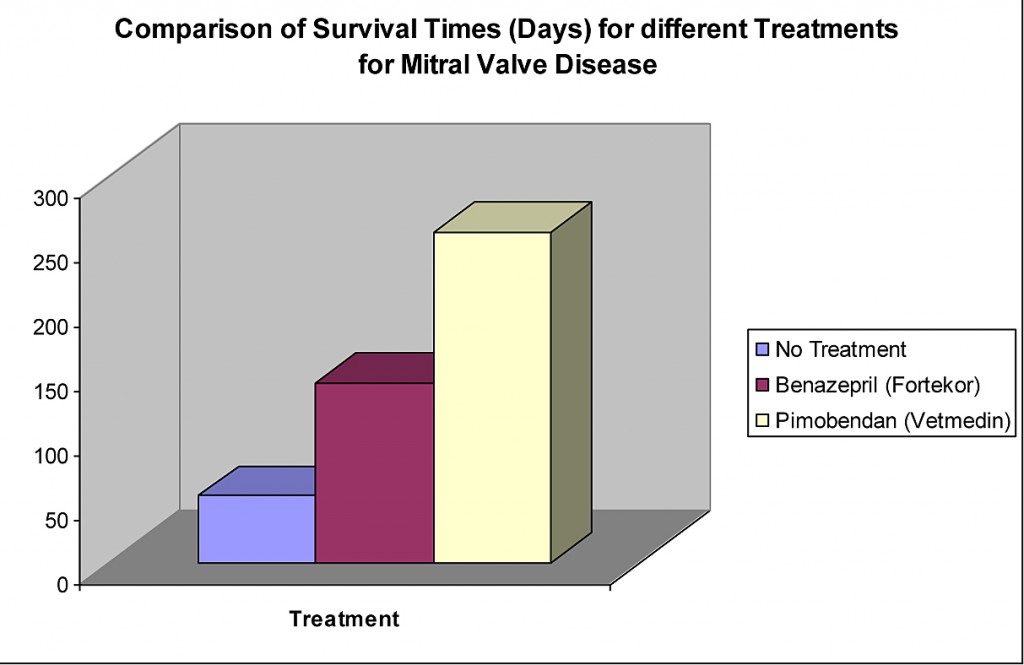 The graph shows the average increase in survival days on heart medications. The combination of Benazapril and Pimobendin (which Zoie was on) increases survival even greater than dogs on the individual medications alone.