Isis is a 2yr old female boxer.  Recently due to some sudden anxiety, Isis began chewing objects at home.  Unfortunately, one of these objects was an electrical socket.  Isis’s owner heard a fair amount of noise and ran downstairs to find her still attached to the plug.  She quickly released her,  assessed and cleaned the area and then called us. 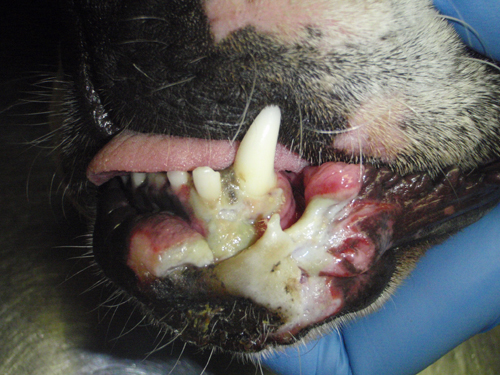 The left side of her mouth showing the electrical burn. The whitish areas are the areas of dead tissue (necrosis) on the lip and gums that is getting ready to slough off.

Burns are classified as an injury to any tissue from heat, flame, chemicals, or electricity.  FIRST DEGREE burns are red and usually there is minor pain at the site of injury. These burns only involve the top layer of skin and heal quickly.  SECOND DEGREE burns have blisters and can involve deeper layers of the skin.  THIRD DEGREE burns occur when the top layer of skin is lost and there is damage to deeper layers.  This is the category that Isis’s wound was classified as.

We decided to give Isis an anesthetic to surgically remove the tissue we were concerned about and started her on antibiotics. Here is the picture after surgery. 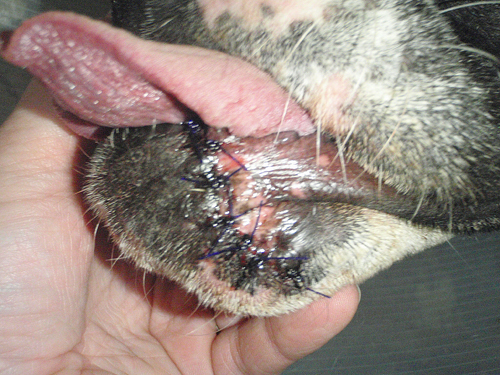 Isis's lip after reconstructive surgery removing the dead necrotic tissue. The sutures were removed in 10 days.

Burns, especially electrical burns, can be very severe and have secondary effects on the electrical activity of the heart as well as cause fluid in the lungs.  The best course of action, even if your pet seems fine, is to apply a cool compress, and seek veterinary attention as soon as possible.