Scout has had a long productive career as a Niagara Regional Police Service Dog since he became a part of the department in 2001 as a young adolescent 1 year old German Shepherd.  Officer Pam Carter and Scout flew through training and the two have caught numerous “Bad Guy’s” over the past decade and were instrumental in keeping Niagara safe.

The handlers become very intuitive to their dogs and develop a symbiotic relationship as the dogs and handlers learn to read each other’s body language with clear precision. Unfortunately on July 22, 2010, Pam noticed something dramatically wrong with Scout.  He suddenly became very lethargic and was trying to vomit but nothing was coming out.  His abdomen also started to become distended and he was pacing and very restless in the vehicle.  Pam immediately realized that this could be a GDV (Gastric Dilation and Volvulus) which is fairly common in German Shepherd dogs.  She also realized he required immediate emergency surgery if this was the problem or else he would die within 24 to 48 hours.

It is because of this early recognition that we were able to see him immediately and confirm the diagnosis of a GDV on radiographs. 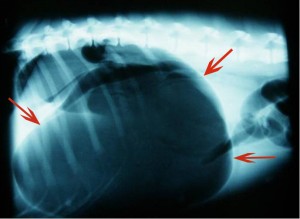 Scout’s stomach on X-rays revealed a very large distended stomach (outlined with red arrows) that was full of air.

A GDV can occur when the stomach over distends with food, water and/or air and then “twists” onto itself and cuts off all the blood circulation to the stomach.  This strangulation of the stomach starts to cause the stomach to die and the stomach can change from a healthy pink to a dark purple within a couple of hours and an irreparable blackish colour as it progresses. 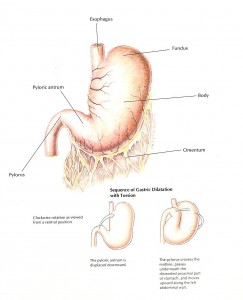 Appearance of a NORMAL stomach 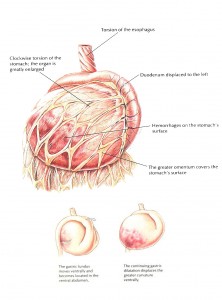 Appearance of the stomach during a GDV

German Shepherds and any large or giant breed of dog are prone to this condition due to genetically having a very deep chest which gives more room for the stomach to move around in the abdomen.  The Niagara Regional Police Canine Unit are well aware of these factors and the necessary steps to reduce this condition from occurring.  However, even with the best preventative measures, German Shepherds are more than 4 times at greater risk of developing a GDV then a mixed breed dog.  Great Danes are 41 times more likely and have the greatest risk of developing a GDV than any other breed.

Scout was immediately taken to surgery and his stomach looked very similar to the diagram above. Approximately 1/3 of all dogs with GDV die despite surgery, however the success rate dramatically increases with early recognition and intervention which was the case with Scout.  In surgery, the stomach was deflated and rotated back into the proper location.  A gastropexy was then performed which involves making an incision in the surface of stomach and overlying body wall and suturing them together.  This helps to prevent the stomach from twisting again in the future and once the sutures are absorbed by the body, the incisions will have formed scar tissue to keep the stomach in the normal location for the rest of the dog’s life.  Numerous complications can develop during and after surgery, however Scout made a full recovery and was back to work and doing what he loved best within a month.

For owners who have a large breed dog or ones that are “high risk”, there are certain recommendations that help to reduce the risk:

Scout developed his GDV at 10 years of age and he continued on as a service dog until his retirement later that year.  Unfortunately he developed bone cancer (osteosarcoma) when he was 11 years old and was eventually euthanized in April 2011. He is sorely missed by everyone in the NRPS but his legacy lives on.  We hope that Scout’s story may help people recognize or ideally prevent GDV’s from happening to other dogs in the future.