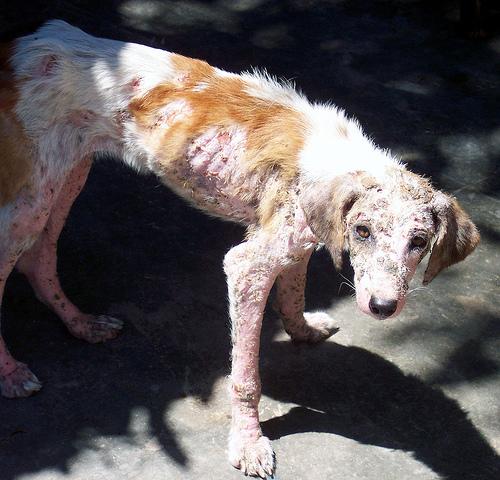 Sam is 4 year old mixed breed dog who came to see us for the first time in the summer of 2008. He had never had any health issues in the past and prior to this issue loved walking, swimming, and spending time with both of his owners.

Approximately 3 months earlier, Sam started scratching and losing his hair coat. The owners initially thought the dog was losing his winter coat but realized that something else was going on. They tried a pet store flea treatment and flea shampoos, which did not help at all and he seemed to be worsening. Sam’s was at the point where his quality of life was very poor and was suffering and losing weight.

We had the privilege of meeting Sam for the first time in June 2008 (seen in above photo). At that time approximately 80% of his hair coat was gone and replaced by raw, scabby, and bleeding skin from his scratching. He was quite emaciated but still a very sweet dog with normal vital signs otherwise.

Dr. Tummon took skin scrapings of the skin to look for any microscopic parasites. When looking through the microscope, the problem became immediately apparent when dozens of Demodex mites were seen (an example of the “cigar-shaped” Demodex mite can be seen in the photo on the left).

These mites are actually normal inhabitants of dogs skin (and actually humans) and the immune system keeps the mite numbers to a very low amount. In a normal dog, the typical number of mites on their skin will never cause any skin disease. However, dogs can develop immunosuppression (where the immune system is unable to fight off disease) for a variety of reasons which is what happened with Sam. The problem eventually spirals out of control and will eventually cause death.

The treatment for Demodex revolves around killing the mites and addressing the reason for the immunosuppression. Sam was placed on antibiotics and medicated baths to treat the secondary skin infection and treated with a product called Advantage Multi weekly to kill the Demodex mites on the skin.

The treatment of Demodex takes months to see the new hair growth. However after 1 month, Sam was feeling great as he pranced into the exam room with his head held high and tail wagging. By the second month, his hair was growing in very well (as seen in the photos below) and is starting to look like a normal dog again. Unfortunately, some of the skin has been permanently scarred and may never grow hair. However, Sam is now enjoying a great quality of life now and is now “itch-free” as his hair slowly re-grows. 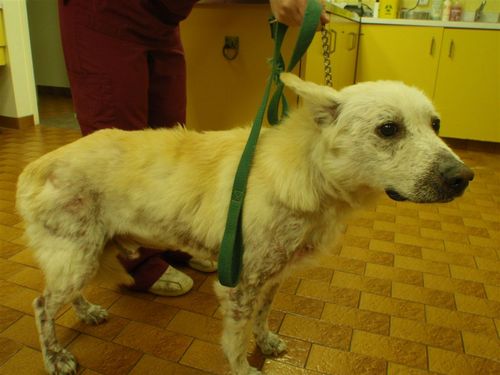