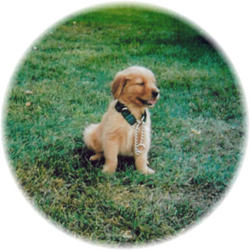 Steve and his Weight Loss Challenge

Whenever anyone brings their beautiful energetic new puppy home for the first time, they never imagine that one day their puppy could grow into an obese overweight dog. Owners never do this intentionally, however there are numerous reasons why dogs and cats become overweight. Similar to reports in human obesity, approximately 50% of our pets are overweight.

Certain breeds have a greater genetic potential towards obesity, such as Steve who is a Golden Retriever. There are also numerous medical reasons why dogs may become overweight (i.e. Hypothyroidism, Cushing’s disease, etc). Unfortunately, the majority of overweight pets are simply overweight due to excessive calories in their diet and/or a lack of an appropriate exercise regime.

However, for the past year our Veterinary Technicians have been organizing a computerized “Slim Fit” program. This program is offered at no charge to our clients and formulates a detailed plan to get the weight off of overweight dogs and cats.

Let’s introduce you to Steve. 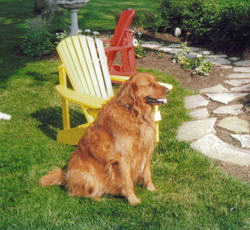 Steve is very lovable and adorable 7 year old Golden Retriever who is immensely loved by his owners. Unfortunately Steve’s weight dramatically increased once he became an adult dog to the point where he was more likely to develop certain health issues. His thyroid levels were checked in 2007 and were normal (ruling out Hypothyroidism).

Steve started the program in January 2008 weighing an impressive 123 lbs. 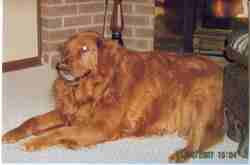 Around Christmas 2007, Steve slipped and became lame on his back leg. After x-rays and palpation of the limb, it was determined that he had ruptured his ACL (anterior cruciate ligament) in his knee (which is often brought about from obesity and a genetic predisposition for the disease). He would have to lose weight to help prevent the same thing from happening in his other knee and to help prevent further damage after surgical repair of the affected knee.

Our Veterinary Technicians were starting the Slim Fit program and Steve was a perfect candidate. 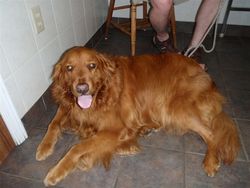 His owners were very keen on the program and followed his instructions completely. The computerized program worked out his Body Condition Score (BCS) at 123 lbs and calculated the calories required to slowly reduce him to his ideal body weight at BCS. Steve went on a special diet called Waltham’s Calorie Control.

This is a picture of Steve in July 2008 weighing 90 lbs. An unbelievable 33 lbs weight reduction 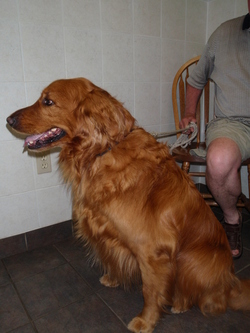 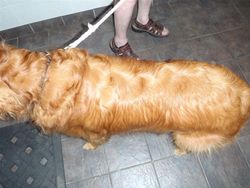 Overhead profile of Steve in July 2008 showing his slim profile in the waist area.

Steve’s owners report that he is doing great at home and is far more energetic and acting like a new dog. He has also recovered well from his knee after surgery. Steve’s owners have to be complemented on their diligent efforts especially for continuing to get weight off of him during the recovery period after surgery when his exercise was severely restricted. Steve will continue to see the benefits of his profound weight reduction for years to come.

If anyone has an overweight dog or cat and are interested in our program, our Veterinary Technicians are willing to assist you with the program.