Interesting Cases – The Importance of Spaying 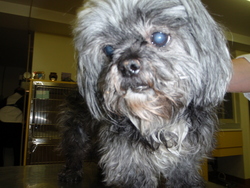 Scimpi is an elderly female Shih Tzu who came in very lethargic and not eating. She wasn’t spayed and the owner noticed some discharge from her vulva area for a few weeks. On examination her abdomen appeared distended on palpation and she had a mild fever. 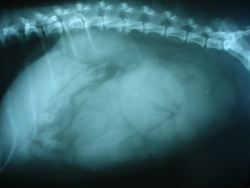 An X-ray (radiograph) and blood work was done which revealed that she had a significant infection going on in her body.

Scimpi’s X-ray (seen on the RIGHT) revealed a large distended whitish structure in the lower back part of her abdomen that was full of fluid (dense structures appear whiter on x-rays while less dense objects appear blacker (i.e. air appears completely black)). 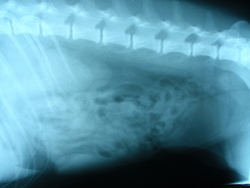 This is an x-ray of a normal dog’s abdomen of nearly the same size as Scimpi. Note that the large whitish structure is not present in the abdomen on this x-ray which is present in Scimpi’s. Instead there are normal intestines with blackish circles inside, which is normal gas in the intestines. 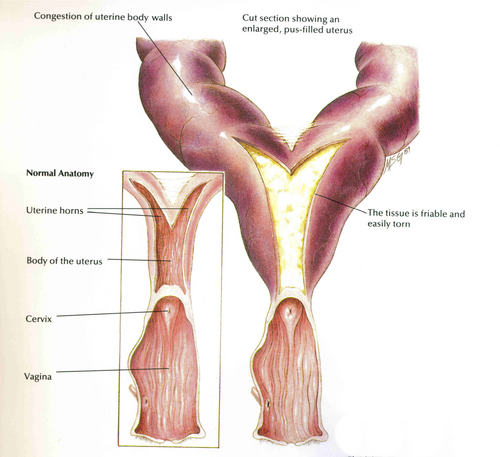 Scimpi had all the signs of a Pyometra, which is a severe infection of her uterus where her uterus fills up with pus and secondarily drained from her vulva. In severe cases, the pus might not drain at all risking the uterus to rupture. If the uterus ruptures, pus will leak into the abdomen which carries a high risk of death.

This is what a normal uterus looks like (ie that is not filled with pus). It also shows how we “Spay” a dog (or more appropriately called Ovariohysterectomy). This procedure was performed on Scimpi, however when the uterus is filled with pus (i.e. Pyometra), it is far more difficult and carries a risk of rupture and leakage which could have life-threatening consequences. It is also a far more costly of a procedure and more invasive to the dog.

During a spay, we remove both ovaries and uterus to the level of the cervix as shown on the diagram. Spaying your pet prevents a life-threatening Pyometra from ever happening. If a dog is spayed before their first heat (i.e. 4-6 months of age) the chance of the dog getting mammary cancer (i.e. breast cancer) is only 0.5%. However, if she is spayed after her heats, the chance of mammary cancer dramatically rises to 28%. There are also numerous other benefits of having your dog spayed.

This shows the paramount importance of getting your dog spayed at an appropriate age to reduce or prevent these severe problems from occurring.

In summary, Scimpi made a dramatic recovery and the owners could not believe what a new dog they had after the surgery. The owners said she appeared 5 years younger and she likely had a low-grade uterus infection for months or longer. They now really wish they had her spayed as a puppy and are now well aware of the benefits of having a dog spayed.

To find out more about spaying or neutering, their are numerous articles located within our website.