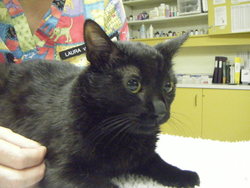 This is an interesting case but unfortunately true. Tiddy Tat was referred to us from a veterinary clinic in Welland. Tiddy Tat is a very cute 1 and 1/2 year old female cat that was a stray for almost a year before her compassionate owner was able to adopt her once she lost her fear of people. She was seen around the neighbourhood for most of that year sneezing with a lot of nasal discharge coming from her nose.

Tiddy Tat was taken to the owners regular veterinarian for her vaccines, to be spayed, and to address the sneezing and discharge from her nose. She failed to respond to various antibiotics and was then referred to us for endoscopy (using a specialized fiber optic medical camera) to help determine the cause of the nasal disease. 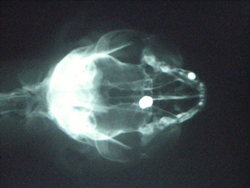 This is one of the radiographs (x-rays) we took of Tiddy Tat’s skull prior to the Rhinoscopy clearly showing a small round object in the middle of her skull. 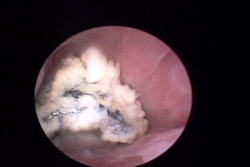 During the Rhinoscopy (using the small endoscope camera to examine the interior of the nose and the back of the throat area), this is what we saw as we entered the nose towards the back of her skull. This metallic object was seen lodged in the very back of her nasal canal. The object was only a few millimeters away from a section of bone called the cribiform plate that separates the nasal canal and sinus from the brain.

The metallic object was covered in white mucous and scar tissue due to being lodged for so long. The object was removed with the endoscope and small endoscopic grasping forceps. 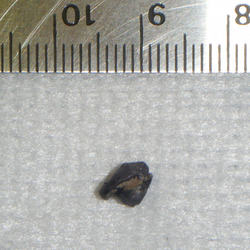 This is the close-up picture of what was lodged in the skull. It was a pellet gun pellet that obviously “mushroomed” as it entered the skull. A very small scar was eventually found on the side of her face from where whe was originally shot.

This cat is very fortunate to have a fantastic owner who adopted her and was determined to get to the cause of her cat’s nasal disease. Tiddy Tat would have otherwise continued to live as a stray outdoors in pain and distress. It also serves as a reminder for any parent whose children have pellet guns to always use proper supervision when they are using them. Who ever shot this cat was bored with pop cans and went on to something that would move. Unfortunately Tiddy Tat was the one.

She has made a complete recovery and is enjoying her new life in pain free comfort.

Click here to see the newspaper article on March 25, 2008 in the Niagara Falls Review